There was and there continues to be a great outpouring of grief in the wake of the fire that has gutted the Notre Dame. Social media is flooded with messages of great sorrow and disbelief. People have been quick to post their selfies in front of the Notre Dame in previous years, before the fire, perhaps an expression of deep regret that this icon has been devastated.

This fire and the subsequent worldwide outpouring of grief and disbelief has touched on the latent yet somewhat unexplainable affection that humans have for grand old structures like the Notre Dame and for historical artefacts in a broader sense. One thinks of the other similar splendid cathedrals dotted around Europe that draw hordes of tourists every day. One might think of the towering vaults of King’s College Chapel in Cambridge, built in a related Gothic tradition to the Notre Dame.

These structures are beautiful in and of themselves. The architectural design is often ambitious but in an almost reverent way, taking great care to complement the natural surroundings and existing architectural theme of the wider city. However, it is the cultural link that these buildings act as, a conduit into the past, which explains the great emotional attachment humans naturally feel for buildings like the Notre Dame.

Cathedrals are the cultural and geographic heart of many great Western cities. Faith once held the moral centre of society and by natural extension these grand structures occupied the centre of the city, the beating heart of great towns like Paris. Indeed, this placing of great religious structures at the heart of the city because religion played such a key role in national life is not unique to Western Christianity. Many cultures have placed what is important to them at the centre of their city or in places which dominate the cityscape. The Aztecs built their terrifying stone pyramids at the heart of Tenochtitlan. The Temple Mount dominated the layout of Jerusalem. The Imperial Palace lies at the heart of bustling Tokyo. It is natural to do and indeed, it makes perfect sense.

Often these structures bear witness to great events in the nation’s history. The Notre Dame stood through two world wars. It witnessed The French Revolution. It was where the coronations of Henry VI of England and Napoleon I, 400 years apart, took place. They thus serve as a direct link to a nation’s past being the ‘eyewitnesses’ to high points in a national story. Statues, plaques and tombs are housed in these structures to remind visitors that they are just a part of a greater and far older whole.

Macron lamented as the fire raged, “Notre Dame is our history, our literature, our imagination…it is our common history, and it is burning”. Priceless artefacts are housed in the cathedral including the purported Crown of Thorns and priceless sculptures of Joan of Arc and the Virgin Mary. These aren’t just ‘nice old things’ that we should preserve by virtue of being old. They are treasures which those before us thought fit to preserve because it meant something important to them which they wanted to hand down to those yet to come. These treasured artworks are part of the tapestry of our history and by extension, a part of us and our story. They are representative of what influences the way we think and the way we do things in the present.

Sir Roger Scruton, one of the greatest conservative thinkers of our time, describes the encounter with beauty, which one finds in architecture, as “being transported by the things we see, from the ordinary world of our appetites to the illuminated sphere of contemplation.” The Notre Dame had challenged Parisians and all who were lucky enough to look on it to think of things beyond the earthly, material realm, and to dwell on the heavenly realm, where its marvellous spire once pointed to.

Sir Kenneth Clark, one of the most celebrated art historians of the 20th Century, in his famous documentary entitled Civilisation, stands in front of the Notre Dame, when it was still whole with its beautiful spire reaching into a clear summer sky. He says “What is civilisation? I don’t know. I can’t define it in abstract terms yet. But I do know it when I see it and I’m looking at it now,” as his gaze turns to the Notre Dame and its grand edifice. 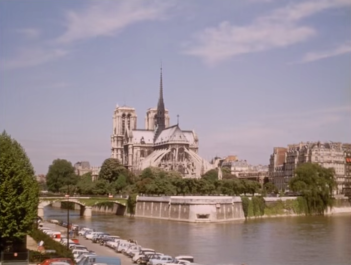 Great architectural works are how civilisations express themselves on a grand, almost timeless scale. They speak to a people’s aspiration. They are manifestations of human attempts to reach, as closely as they can, perfection. This desire to reach an ideal of perfection, as Sir Kenneth Clark puts it, has been expressed by the West “through myths, through dance and song, through systems of philosophy and through the order he has imposed on the visible world.” The overall order and yet timeless beauty of grand place of worship like the Notre Dame is an attempt by man to reach perfection, an attempt at an offering fit for a perfect God. Now it is no more and it is as if that work of history and high point of human achievement was never there.

Western Civilisation is fading away and the will of its people to preserve its knowledge and richness wanes. The blow dealt by this fire to Western cultural heritage has been a devastating one. One can hope that it will be rebuilt so that future generations can enjoy this treasured link to the past. A link that we have enjoyed and one that those that have come before us have enjoyed. When we forget our past however, we might as well be setting our great buildings and works of art on fire.

Chanum Torres is currently serving as the President of the Conservative Club.